A place for Ellie to put their stuff.

This work is licensed under a Creative Commons Attribution-NonCommercial-ShareAlike 4.0 International License.

I didn’t do much in the way of actual development last weekend, still just using the example code from Pimoroni’s repo. Instead I spent most of the time tinkering with the hardware setup and a temporary enclosure so I can actually run the thing outdoors. Then I ran out of time to actually post anything about it… In the process I’ve found a couple of little issues:

At this point, installation of the software has been fairly straightforward. There’s an existing script in the repo for pushing data to luftdaten, so I didn’t even really need to think about that. The only point where I even really had to think was when I had to remember exactly how to write a systemd unit for running it as a service.

We did manage to (accidentally) verify that the particle sensor works though. Filling the kitchen with smoke from the oven then letting it all escape from a window directly below the sensor made for an interesting blip in the logs! These lines of data were recorded just before the window was opened, and then about 30 seconds later:

P2 is the PM2.5 count, P1 is PM10. Note that PM10 includes all the particles that count towards PM2.5 as well, as they’re a count of particles below the given sizes. 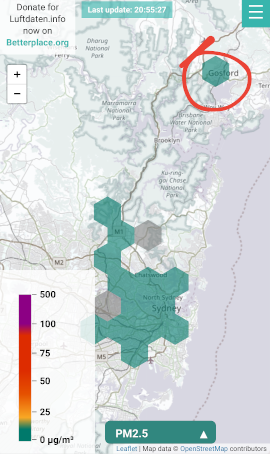